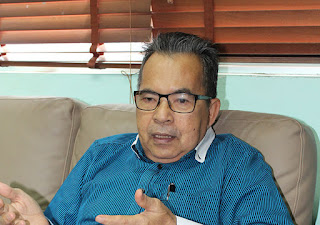 MIRI: Incumbent Sibuti MP Datuk Ahmad Lai Bujang is ready to be re-nominated and defend the seat for the Barisan Nasional (BN) in the 14th General Election (GE14).

“I am leaving it to the BN and PBB leadership to decide, nonetheless I am ready to defend the Sibuti parliamentary seat,” he said here yesterday.

Despite rumors that he would not contest due to health issues, Ahmad Lai insisted it was concocted by certain people who were lobbying for the seat.

“I still go down to the field and attend events which prove that I am still able and healthy to serve the people,” he explained.

According to him, there are also some elected representatives with critical health problem but are still attending the Dewan Rakyat session.

“There are Members of Parliament (MPs) who are on holiday for three to six months due to health issues, some have difficulty walking and so on, but they still take responsibility as the representatives of the people,” he explained.

Hence, he assured that his health issue was not a big concern as that he was always working and going down to the field to meet the people and run his task as the MP.

“The grassroots voice still wants me to be re-nominated and if I am given the opportunity, I will ensure BN’s victory again in this seat,” he said.

Despite being aware of the many individuals who are interested in lobbying for the seat, he said Malaysia is practising a democratic system and everybody has the right to speak out.

“We practise a democratic system, we cannot deny their right to lobby but the decision remains in the hands of the party leadership,” he explained.

In the 13th GE, Ahmad Lai won the Sibuti seat for the BN by a majority of 6,066 votes.
Borneopost