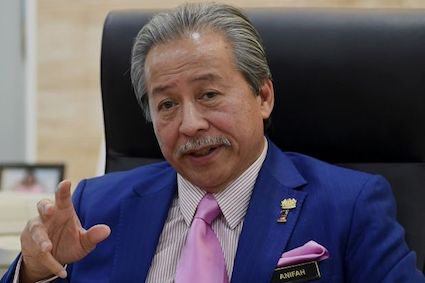 In a statement on Sunday, Anifah explained that the article, titled “UK calls on Malaysia to accept election monitoring and condemns fake news and boundary law” tries to take advantage of Datuk Seri Najib Tun Razak’s non-appearance at the ongoing Commonwealth Heads of Government Meeting (CHOGM).

The article claimed that Malaysia has ruled itself out from assuming the chairmanship of the Commonwealth in 2020.

“Let me underscore a point that is evident to all, no sane political leader in a democratic society will leave their countries less than three weeks before general election, for any meeting abroad,” Anifah said.

Much was made of the responses given by the British Minister of State for Asia and the Pacific, Mark Field, to its parliament on matters such as the Anti-Fake News Act and the redelineation of the electoral boundaries, as well as the role of external election monitors.

Anifah pointed out the Act was supported by 123 Members of Parliament, including 10 from the Opposition, with 64 voting against.

“This shows that while the preponderance of the duly-elected representatives of the people believe in the importance of the right to freedom of expression, there must be limits on this right and that it should not be abused to spread fake or unverified news,” he said.

As the last redelineation exercise was held 15 years ago, Anifah said the EC was merely carrying out its constitutional responsibility to review and recommend changes to ensure balanced populations between constituencies.

He said contrary to the Sarawak Report‘s claim that Najib has consistently refused to allow external observers, the EC has invited observers from 14 countries.

The article said Field was concerned about how the Anti-Fake News Act was passed, and Anifah hoped he could clarify the following statement, which the portal alleged he made: “We are monitoring developments closely, working with EU and other foreign partners and stand ready to make any necessary representations”.

If the statement was indeed made, Anifah had the following to say to Field and others of the same mind.

If the Sarawak Report and the West chooses to believe otherwise, he added, they are entitled to their own opinion.

“But I choose to believe in the inherent intelligence and good sense in the average Malaysian voter in my constituency of Kimanis and elsewhere.

“And that on May 9, these attributes will lead them to again to support Barisan Nasional as their choice of government,” he concluded.