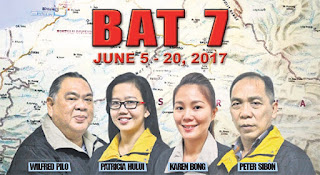 Lubok Antu is no ghost town

Lurking in the deep forests some 86km from Sri Aman lies the beautiful and serene Batang Ai that hides a dark secret — the river is believed to be haunted by the souls of those who have died in it.
Local legend has it, members of a British military excursion moving upstream of the Batang Ai looking for enemies in the Brooke era were inflicted with cholera, a contagious disease that killed many officers and men.

Their dead bodies drifted downstream and were found near the pool which forms the deepest part of the river.

That’s how the town of Lubok Antu got its name, where ‘lubok’ means pool and ‘antu’ means spirit or ghost.

BAT 7 arrived at this small town that borders on Badau in West Kalimantan, Indonesia yesterday.

We ventured around and arrived at the suspension bridge crossing the Batang Ai to where Kampung Pasir which has about 1,000 inhabitants sits on the bank, mesmerised by the quiet surroundings and reflections on the river.

Lubok Antu is a nice and friendly small town with a population of about 5,000, the majority of them Iban. So it plainly makes sense that even the Chinese residents communicate in the Iban language, and this just shows how unique communities in Sarawak can be.

Yet beyond the earlier mentioned spooky tale, this town is quite vibrant with a few rows of shophouses, a police headquarters, an upcoming multipurpose hall, a church with interesting architecture, a busy weekend market and an old cempaka tree estimated to be over 50 years old.

Pemanca Chua Kee Long said business and trade have dropped in recent years but nonetheless, they are trying to keep their heads above water in these tough economic times.

“Business is considered stable because this is a border town so we have traders coming in and out on a daily basis,” he explained over lunch at a coffeeshop yesterday.

“We see development in town over the years and there are also government projects like the multipurpose hall that’s now about 80 per cent complete,” he added.

Speaking of education matters, Chua highlighted the need for a Chinese national primary school (SJKC) to cater for the Chinese community here.

“If we want to send our children to a Chinese school, they need to go to Engkilili or Sri Aman at the moment. There’s only one Chinese textbook in the public school here and it’s not enough,” he said.
Another long outstanding issue affecting resettlers displaced by the Batang Ai dam, according to local Roland Entunggan Munang, was the lack of land to build houses for their extended families.

“There are 22 longhouses affected by the dam and the second generation resettlers are finding it difficult to find land to build their houses,” he said.

“In this regard, we urged the local elected representatives to find suitable land where second generation resettlers can build their homes.”

On the overall development of Lubok Antu, Roland was happy with the current policy of Chief Minister Datuk Amar Abang Johari Tun Openg on shaping Sarawak through the digital economy and e-commerce to transform the rural community.

“Nothing is impossible,” he quipped.

In the last two days, we have observed that people in rural areas such as Roland are well aware of technology advancement as the key to the future.

As we traverse the length and breadth of this mighty state, BAT 7 hopes to gauge the reception towards to this latest government policy introduced by the chief minister.
Borneo post