BREAKING NEWS
GMT+8 03:28
Home Malaysiakini Needs to Prove that Rosmah had Received a Diamond of RM116 million as a Gift 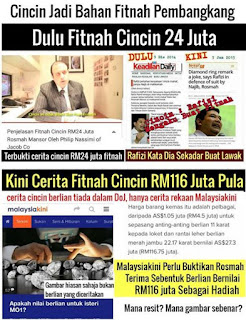 The opposition pro-portal Malaysiakini was seen trying to portray a perverse perception that Datin Seri Rosmah Mansor had allegedly received a 22-karat diamond worth of USD27.3 million (RM116 juta) as a gift from Low Taek Jho.

On June 18, 2017, at 6.02pm, Malaysiakini has made the allegation by claiming that Jho Low bought the diamond from a stolen 1MDB fund. Malaysiakini has yet to prove this accusation. This unfounded allegation would be like a slandering story of a ring of RM24 million.

On December 9, 2014, Rafizi accused Rosmah of buying a RM24 million ring in Keadilan Daily. “I will defend my statement,” Rafizi said. But on June 5, 2015, when asked to defend himself in court, Rafizi said “I was just joking about the ring”.

After the act of slandering, he said it was just a joke. The actions by both Rafizi and the opposition are clearly irresponsible and evil.

In an interview on April 5, Jacob & Co’s Jewellery director, Philip Nassimi said the 30.11 carat ring was actually brought into Malaysia for Maira Nazarbayev, the mother of Daniyar Nazarbayev who was engaged to Rosmah’s daughter, Nooryana Najwan.

The video was also uploaded on youtube to deny the claims of some quarters that Rosmah bought a RM24 million ring. The item valued at USD8 million were delivered on April 15, 2011 to Kuala Lumpur, Malaysia for the purpose of inspection only and the same item were subsequently brought back to the United States on May 16, 2011.

Documents from the US Customs and Border Protection and the Department of Homeland Security proved that the goods were brought back to America and was not sold.

Mahathir speaking to Malaysiakini on June 19, 2017 on this ring, said;

This issue of the ring has already been brought to court and Rafizi has admitted to only “making a joke”. So, what more does Mahathir wants? Since entering the opposition, Mahathir can also be fooled by Rafizi now.

Now, Malaysiakini with other opposition leaders, especially the Chairman of Parti Pribumi Bersatu Malaysia (PPBM), has joined forces to play the malicious slander against Datin Seri Rosmah with the help of the US Department of Justice (DoJ) statement.

In the DoJ statement of 251 pages, there is no mentioning of Rosmah or Najib at all. But Malaysiakini struggled hard to make the effort to guide the story so that it reflected that Rosmah was involved in the issue.

The picture of a diamond featured in the Malaysiakini slandering article was taken from the Google search. It wasn’t a real photo.

If there is a real receipt, transaction and pictures of the diamond, send it out as proof. DoJ only came out with a media statement, a year has passed, and yet the matter was not brought to trial in court. It was only left as a charge and has yet been proven by witnesses and sufficient evidence.

DoJ only indirectly connects the term MO1 with individuals who deals with 1MDB companies. DoJ does not dare to sue Najib or Rosmah as they themselves know they are not involved. Therefore, they played safe by creating the term MO1. President Trump himself is much opposed to DoJ as in the issue of confidentiality with Russia and the issue of the 2016 Presidential campaign.

Various agencies have conducted investigations into 1MDB, including the Public Accounts Committee (PAC) comprising of opposition MPs. In the report by the committee, there was no mention of any involvement by any individual mentioned in the DOJ suit.

Why did Tony Pua not provide evidence about this RM116 million diamond for investigation? Now when the opposition has no issue to be used to attack Dato Seri Najib, a new story about the diamond worth of RM116 million was created.

If there is any evidence, then DoJ should contact the Attorney-General, PDRM, MACC and PAC to conduct a thorough and fair investigation. If not, what Malaysiakini wrote about this diamond is merely an evil perception, without any solid evidence. They only create flowcharts and design graphics.

Because what DoJ claims was just a statement, not a lawsuit and has not been brought to court. So, why is Mahathir and Malaysiakini so adamantly wanting to punish?

Guan Eng who has been in court for corruption is not punished since the case has not been resolved. Malaysiakini has to prove that the RM116 million diamond was a gift first and foremost. If not, what Malaysiakini accused is just a “joke” by Rafizi.