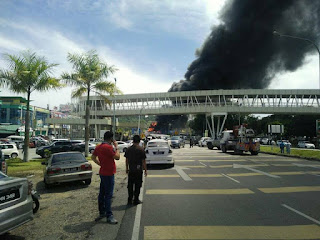 In the first accident in Bintulu, an oil tanker driver was killed after he lost control of his vehicle which hit a road divider and exploded at about noon.

The fire from the burning tanker also spread to five other vehicles and a motorcycle waiting at a traffic light junction, injuring two other victims.

In an earlier accident in Lahad Datu, a van driver and his three passengers were crushed to death when the vehicle they were travelling in collided with an oil tanker at about 6am.

I believe that the relevant agencies and the oil companies involved, which are known for their strict rules and regulations on safety, are now investigating the cases thoroughly.

It is important that they leave no stone unturned and find the causes of the fatal accidents and ways to avoid similar incidents from recurring in the future.

The most important thing to do after the investigations are completed is to make the report public so that the people could know what had caused the two accidents.

Since petroleum companies are known for the high standard for safety and health aspects, it has surprised us that such incidents could happen.

Members of the public, who are also road users, have the right to know the outcome of the investigations as it would enable them to give input on how to stop such accidents from happening in the future.

This is in line with the MIROS effort to promote a safety culture among heavy vehicle operators, including express buses and lorries.

I hope that the Government would also set up a transformation lab for lorries and trucks after it had completed the Express Bus Transformation Lab on April 7.

It will help the authorities find mitigation efforts to help reduce the number of accidents involving lorries and the impact to other road users.

The bus lab was set up in January to study ways to improve the quality of service, safety and sustainability of the bus industry by gathering opinions from all stakeholders, including the public.
It was set up in response to a deadly bus crash in Pagoh in December last year which claimed 14 lives and injured 16, and the Genting bus crash in July last year which killed the driver and injured 15 passengers.

One of the reasons for accidents involving heavy vehicles is fatigue and we need to be able to better monitor the drivers and ensure that they could perform up to the standards required of them.
Other causes are the use of illegal retread tyres and their debris on highways.

The Government should also conduct frequent health checks on lorry drivers to ensure that they are healthy and not on drugs.

I believe that enforcement alone is insufficient as we need to increase awareness and participation from heavy vehicle drivers and other road users so that they could always be on alert and take precautionary measures to prevent accidents.