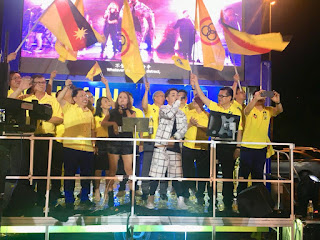 Sarawak United People’s Party (SUPP) wants to help State Barisan Nasional deliver all the 31 parliamentary seats in this 14th General Election (GE14) by winning the seven seats allocated to the party. Party president Datuk Dr Sim Kui Hian said it is important for State BN to win all 31 seats in order to achieve a ‘stronger Sarawak’.

“Since the opposition MPs (from Sarawak) did not speak in Parliament, and since they did not vote against Bill (disadvantageous to Sarawak) but only talk about it outside, let us from State BN go in, take their places and get results.

“If State BN wins all the 31 seats, those in the federal government will listen to us and come to our needs more often,” he told reporters after the launch of ‘Justice Bee League’ mascots and ‘war trucks’ for the GE14 at SUPP headquarters here last night.

Dr Sim, who is also the state’s Local Government and Housing Minister, said there is greater awareness on Sarawak’s rights under Malaysia Agreement 1963 (MA63) now thanks to the brave efforts by the late Pehin Sri Adenan Satem during his time as the fourth chief minister.

By putting more MPs from State BN in the parliament, he believed this will give Sarawak more voice to realise good things including to reinstate the Sarawak Rangers army unit.

Earlier in his speech on one of the ‘war trucks’, Dr Sim called on Sarawakians not to be misled by Pakatan Harapan which he dubbed as coalition of fake hope.

He said Sarawakians felt cheated when knowing the bad things done by Pakatan chairman Tun Dr Mahathir Mohamad to Sarawak when he was the Prime Minister, and he urged them not to be cheated again this GE14.

Meanwhile, SUPP deputy president Dato Sri Richard Riot said the party must make sure it wins the six seats lost in GE13 in 2013 namely Bandar Kuching, Stampin, Sarikei, Sibu, Lanang and Miri.
Riot, who was the only SUPP MP after he won Serian seat in GE13, was happy to note the presence of many youths in last night’s event which indicated many people are now returning to SUPP.

“As far as Serian is concerned, it is already in the bag for us. This is not talking arrogantly, but that is the reality.

“The challenge now is to win back the other six seats and help State BN to a clean sweep of all 31 seats so that we can achieve a Stronger Sarawak,” he said.
Also speaking at the event were the party’s youth chief Michael Tiang and women chief Kho Teck Wan.

A total three ‘war trucks’ were launched that night, which will be used for campaigning purposes in the southern, central and northern regions.

Dr Sim, while did not disclosing the costs of the trucks, said these trucks are agile enough to go to places where the party needs to campaign.

The ‘Justice Bee League’ mascots and theme song were also launched in a pop concert setting in what seemed to be an approach to reach out to the young.