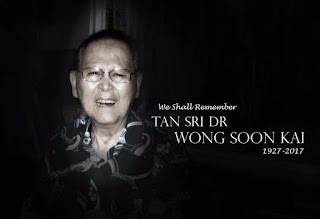 Former deputy chief minister Datuk Patinggi Tan Sri Dr Wong Soon Kai has passed away this morning at around 4am.

In 1959, Soon Kai became the first Sarawakian to graduate as a surgeon in Britain.

He served as a government doctor for 15 years and spent another four years in private practice before entering politics and becoming a state minister in 1974.

He was deputy chief minister before he retired from politics in 1996 and was then the science adviser to the Sarawak government.

Funeral service will be held in Trinity Methodist Church at Jalan Ellis at 9am and thereafter proceed for cremation at Nirvana Memorial Park.

Meanwhile, SUPP president Datuk Dr Sim Kui Hian in his Facebook post, said he was deeply saddened by the news of the passing of Soon Kai.

“On behalf of Sarawak United People’s Party I offer my heartfelt condolences to Puan Sri Dr. Jane Yong, her children and grandchildren.”

Dr Sim, who is Local Government Minister, recalled Soon Kai was a party comrade who was always concerned with the welfare of the party and fellow Sarawakians till the end.

“He was a medical colleague, a great gentleman, a mentor, an inspiring leader and a statesman who dedicated his whole life to his fellow countrymen. It is truly a great loss to our homeland Sarawak and our country. May his soul rest in peace.”